I would like to bring MeWe.com to your attention. MeWe is the new social network. It was created in answer to the disrespect of privacy from Facebook and other tech giants.

It is for free. No ads, so spyware, no bullshit. It is supported my users who buy subscriptions to  extra’s, like additional emoticons, themes and pages. But the free site already provides a complete social network. Like any new website, it will take you a little effort to understand the user interface. It is worth the effort.

In the groups you find many groups about naturism. See the list below the image. MeWe has the option to mark photos, groups and posts as NSFW (“not safe for work”). So naturists can post without censoring photos. So let’s all turn our backs to Facebook and Instagram and join together on MeWe.

My MeWe profile is Natams. Send me a message after you created a complete profile!

What others say about MeWe

You don’t have to take just my words. See what others say. For example this article by Emizen Tech.
Or just search for what is MeWe?

This is a selection of naturist groups I found on MeWe (with the number of members in May 2022).
There are more groups using the words “naturist” or “nudist”, but in a wrong way, so those are not listed here.

Naked everywhere, it’s natural (835)
This group has a strong verification process for new members and is well moderated.

Naturist Business Network (108)
Interesting initiative, but unfortunate no activity for over a year.

These groups are in Dutch

Any MeWe group that should be listed here?

Criteria for a group to be listed:

Send a message on my MeWe profile Natams if you know or run a MeWe group about naturism that meets these criteria and should be listed here. 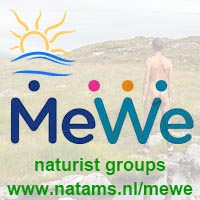